WHEN DESIGNING AND USING APPLIED TECHNOLOGY IN ITS CRANES, FASSI MAKES “NO COMPROMISES” IN TERMS OF SAFETY

Each innovation developed by Fassi research directly or indirectly deals with safety, as this is an integral part of the company DNA. Fassi carefully designs and tests each system or device, putting safety at the centre of the engineering and working interest.

Each new technology or system adopted by Fassi on its cranes is always part of an overall logic aimed at maximizing the safety of both the operator and the machine. The evolution of electronics applied to hydraulic cranes has offered an essential contribution to this work, allowing the creation of technologies that control themselves automatically, recognize working limits, inform the user in real time and prevent static and dynamic problems how, where and when required. Fassi cranes are in the vanguard world-wide as regards active and passive safety. A record that is consolidated by further innovations, which underline how safety for Fassi is truly something that cannot be compromised.

Yes to safety, but without limiting the performance and the versatility of the machine, which is guaranteed by innovative and particularly effective systems. Let us now take a look at the main aspects that make Fassi safety “without compromise”. 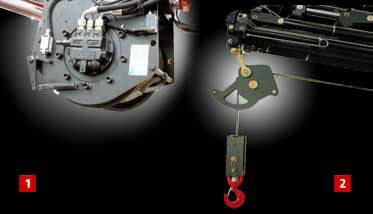 One of the determining factors guaranteeing maximum safety in every working condition is the FX system (Fassi Electronic Control System), part of the electronics developed and improved by Fassi for its cranes. The constant interface between electronics and hydraulics allows the pressure induced by the load on all the articulations (inner, outer and eventual jib) to be kept under constant control, with constantly vigilant and full handling of crane operations from the point of view of safety as well.

The FX system (Fassi Electronic Control System) detects the load and movement conditions, extensions included, activating when reaching the nominal loads, the block of all the crane functions that, if activated, would determine an overload.

On the contrary, it keeps active all the functions which reduce the distance of the load from the column and consequently brings the crane back to within the foreseen working conditions.

When compared to normal “lifting moment limiting devices”, the FX system (Fassi Electronic Control System) ensures greater working versatility and precision by means of centralized coverage of all the operations related to lifting.

With enforcement of the Machinery Directive and the new European safety standards (EN12999), the adoption of a safety device against risks deriving from direct or indirect overload applied to the winch has become compulsory. Most of the methods used are based on devices such as Belleville washers or strain gauges, which read the deformation of the winch fixing plate and consequently of the cable fall. However, these systems have shown considerable shortfalls in terms of reliability, precision, correct reading of stresses and maintenance of the original settings, often obliging the users to deactivate them in order to work.

In line with its own qualified work for safety, Fassi has studied and created an innovative device which overcomes all the limits shown by traditional systems: an exclusive and patented winch torque limiter device which uses a load cell. Based on the load lifted by the winch cable, the plate moves slightly forward and acts on the load cell, which, on reaching the guide value, sends a message to the electronic main unit, which intervenes to deactivate the crane/winch lifting functions. The load cell also checks activation of the mechanical cable stroke and safety function. The system also allows automatic handling of any de-rating of the winch capacities for its use on the jib.

European standards also require a stability check on the installation with an increased load of 25%. If truck stability is not guaranteed throughout the whole rotation arc (360°), the adoption of a system limiting the crane working arc exclusively to the sector in which stability is guaranteed is compulsory.

Bearing in mind this safety requirement, Fassi has designed and created an innovative electro-hydraulic rotation arc limiter system integrated in the electronic safety device management system. Handling of the rotation stroke end takes place by means of three proximity sensors mounted on the column, in order to check the position of the crane booms with respect to the rotation arc limiter, coupled with metallic bands determining the variation in authorized degrees. The two lateral proximity sensors have the job of recording the direction of rotation (clockwise or anticlockwise) and the central one stops rotation in an unauthorized direction when the metallic band passes beyond it. The electronic card will then, through the signal from the proximity sensors and the micro-switches installed on the control element, handle the direction of authorized rotation.

In conformity with safety standards, Fassi cranes adopt a system which automatically limits the crane working arc if truck stability is not guaranteed for the whole rotation arc. The advanced Fassi system works with 3 co-ordinated sensors handling the rotation stroke end.

On Fassi cranes, besides the rotation arc limiter, the installation of a lifting moment limiting device with two working zones is extremely easy and interesting. This device allows operation, with reduced loads, in the unstable area as well, thanks to the electronic connection which handles all the safety devices.

In conformity with EN 12999 standards, Fassi has designed a manual activation system, combined with the electronic lifting moment limiting device, which uses a dedicated software to decide whether, according to the foreseen loads, the load applied to the manual extension can be lifted or not. The system also supplies a sufficiently reliable indication of the value in Kg of the applied load. Should the operator be required to lift a load whose weight is not known with the manual extensions, he can ask the system if the load is within the capacity of the manual extension and then decide, according to the known weight, whether or not to continue with the lifting procedure.

Among Fassi safety equipment, special attention has also been paid to the elements forming part of the crane/truck relationship. A special system of mechanical locking devices to prevent any accidental extension of the outriggers lateral extension supports during truck movement stands out in this sense. Fassi cranes allow the operator to concentrate on his work, preventing problems and helping him at all time in his work with crane and truck.

Fassi cranes can be equipped with an optional system to warn about crane height in the transport position; in the most Countries, this height must not exceed 4 meters (as foreseen by the highway code) in order to avoid problems and accidents during movement of the truck. The system made up of proximity sensors, can be connected to acoustic and visual devices outside the truck or in the cab. The system avoids risky situations, even the most stressful activities when the operator’s attention could fail.

The meticulous safety work carried out by Fassi engineers also involves all the mechanical components destined to protect the operator in the event of problems to the hydraulic pressure systems. A special, extra-large carter covers the hydraulic hoses at exactly their most sensitive point, protecting them from accidental shocks and preventing any risk that leakage of oil under pressure might reach the operator. As you can see, Fassi’s attention to aesthetics and the characteristic beauty of Fassi cranes is the result of operations in which design has concrete functional values. 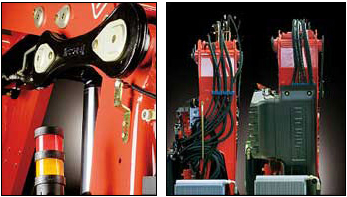 IMPORTANT: to know which of the devices presented in this article are actually operating on your crane, kindly contact the Fassi commercial department.