Safety technology is a very important concept when dealing with the new generation of hydraulic cranes. But how does this technical progress, the result of modern engineering research, work in practice? The best way to check working applications and advantages is to test them in the normal working scenarios.

For the test in the field we used a Fassi F310AXP.24L323 “Evolution” crane, as this model is equipped with all the safety systems mostly under discussion at this time, both on the market and in the specialized press.

GUARANTEEING SAFETY WITHOUT EVER BLOCKING THE CRANE COMPLETELY 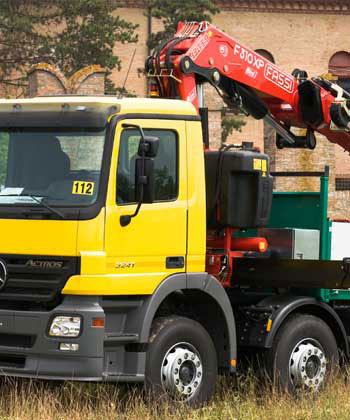 In the test, we start by looking at the new FX800 lifting moment limiter installed on all the “Evolution” generation of Fassi cranes. One of the main features of the FX800 system is the ability to provide the operator with all the most useful information on its interventions, both in terms of the percentage use and the pressure values. But let us go on to talk about the test: the crane was taken to a particularly demanding condition, to the limits of its load capacities. Before the lifting moment limiting device came into function, at approximately 90% of the crane capacities, we noted that a special orange warning light came on and simultaneously an intermittent acoustic signal was heard.

When maximum capacity was reached, the lifting moment limiting device intervened to stop all the functions that could determine a dangerous overload. However, we were happy to note that it was still possible to operate the crane quite normally for all the other functions that did not determine any overload. With activation of the lifting moment limiting device, the alarm light turned red and the acoustic signal became continuous. Thanks to the FX800 lifting moment, the crane is automatically self-controlled without in any way preventing operation. We also tested this situation with the hydraulic jib and the manual extensions. We would like to point out that Fassi is one of the few companies that handles the manual extensions using its own software.

In this test “on the road” we did not have a crane with winch at our disposal, but it is important to remember that the Fassi winch, which we tested directly in the company’s test department, also stands out for its safety. In fact, it is equipped with a particular load cell system which, combined with the FX800 system, intervenes to safeguard from overloads. Fassi has also patented an exclusive, particularly functional and safe mechanical stroke end, which no longer uses the now obsolete micro-switches that the operator often had to disable because of their poor reliability. Let us now take a look at how the crane and its technology behave in the working area. In fact, we are well aware that the weak point of cranes mounted on the back of the cab is the area 180 degrees in front of the cab itself, as the outriggers cannot intervene in this area.

The F310AXP.24L323 Evolution crane used in the test is equipped with a lifting moment limiting device with two working zones, which should completely solve the problem. We tested it by lifting 1.500 kg; when reaching the outriggers, at 180 degrees, the crane stopped. We brought the jib extension ram back in to decrease the “moment”, and then tried the maneuver again. We noticed that the crane is able to turn easily even in the front part, guaranteeing truck stability. During this test we were also able to test the safety system related to the use of ProLink (device which allows operation above the horizontal). With the crane unloaded we lifted the inner boom and the outer boom all the way up and did the same with the jib, but the machine stopped before exceeding the maximum verticality allowed by the safety device (80°). Also to be noted is the fact that the FX800 provides information on working times, so as to allow planned maintenance for safety as well. Information on use, detailed reports giving the crane working cycles, can be downloaded from the special black box, which is the brain of the system.

Another very important safety system is the ADC (Automatic Dynamic Control), which is standard on Fassi Evolution cranes. Let us take a look at how it works: the system protects the crane from uncontrolled dynamic stress. This risky situation might occur, for example, if a less experienced operator mistakenly moves the radio control lever suddenly, instead of moving it proportionally.

On a machine not equipped with this safety device, uncontrolled and sudden lowering would occur, with a consequent shock to the booms that might also cause the truck to tilt.

Let us now look at how the ADC system works. The crane was once again loaded with a weight of 1500 kg and brought up to maximum height. When the incorrect maneuver indicated above was performed, we noted that the boom descended normally and without jerking; we also noted that the speed of descent automatically drops proportionally to the increase in the reach. All this happens smoothly and progressively.

The special ADC system allows the operator to keep the situation under control at all times. The lowering speed reduces automatically according to the load conditions and the lifting dynamics.

GETTING OUT OF UNEXPECTED BLOCKAGES

Unexpected blocking of the crane is a condition that sometimes occurs for various reasons and types of use. Normally the operator deactivates the safety systems to get out of the situation, but this creates potentially hazardous situations. High quality technological research must be aimed at helping the operator even in the most complicated and difficult situations.

Fassi’s engineers have been working on this problem and have found an innovative solution. In fact, Fassi Evolution cranes are now equipped with a system, foreseen by the ‘Machinery Directive”, using which it is possible to deactivate the lifting moment for 7 seconds at one minute intervals.

This means that it is possible to get out of a state of blockage without deactivating the safety systems. Let us look at how it works in practice. With an overhead bridge crane a weight exceeding the crane capacity was loaded onto the crane. The extensions were completely retracted. An attempt was made to lift: the crane did not move. We then pressed the button that releases the block and we managed to exit the critical situation, using the outer boom to set the load down on the ground.

In short, the field test produced positive results for all the parameters tested. Use of the new devices and of the original solutions created by Fassi has anticipated the requests of an increasingly demanding market which rightly expects its machines to give even better performance in total safety.

We tested the Fassi crane in one of the most critical situations: the lifting within 180° in front of the cab. The test was passed with flying colors thanks to a lifting moment limiting device for two working zones.