WITH THIS ADVANCED TECHNOLOGY, FASSI INCREASES WORKING OPTIONS TO BEYOND THE LIMITS CONSIDERED ACHIEVABLE IN FULL SAFETY UNTIL NOW 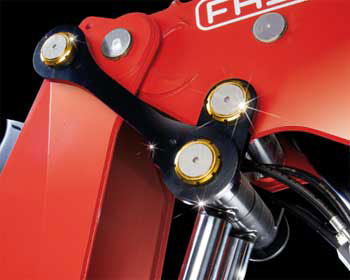 The kinematics in the coupling between articulations and rams represent one of the “most sensitive points” in the crane, both at structural, performance and safety level. For this reason, Fassi engineering has given maximum attention to the dynamics directly related to the boom lever, producing a completely new technology which ensures optimum operation even in the most demanding working conditions. The D.L. technology (“Double Link Technology”), based on the use of double linkage made of special steel, provides considerable advantages in terms of lifting dynamics: configuration of the boom lever, that is to say the distance between the centre of the articulation pin and the centre of the ram head pin, is kept constant at all times, remaining at the same distance during all movements of the ram and consequently of the boom. In this way, it is possible to obtain perfect kinematics, which allow lifting capacity charts with a horizontal load configuration at 0° to benefit of the maximum geometric reach and reduced working envelop under low ceiling areas in lieu articulating inner boom.

In strict co-operation with the lifting moment limiting device electronic control, which requires monitoring and checking of the pressures induced on all the lifting rams, the D.L. system (“Double Link Technology”) technology allows maximum constancy during all the lifting. Even in the presence of the Fassi ProLink system, that is to say the ability to increase the working angle of the outer boom above the horizontal line by 10 to 20 degrees (see presentation on pages 12/13 of this number of “without compromise”), the highest load performances for cranes with load configuration at 0° are guaranteed. The cranes equipped with D.L. technology (“Double Link Technology”) provide more high performance load curves, and the advantages are tangible in all possible load configurations.

The ProLink system is another significant result, which shows how Fassi research offers unprecedented levels of crane performance. Thanks to a longer outer ram and to a particular double linkage system, combined with the Fassi ProLink technology, the outer boom actually increases the working angle above the horizontal line for a number of degrees variable from 10 to 15, depending on the crane type, and from 10 to 20 according to the model of hydraulic jib; this allows recovery of the bend in hydraulic extension booms caused by the load, thus facilitating positioning of the loads themselves. The Fassi ProLink system ensures an increase in the crane working options, simplifying positioning of the loads in complicated situations and where the inner boom, due to its vertical encombrement, cannot be lifted sufficiently.

For example, it is strategic inside openings at ground level, during transfer of loads through doors and windows, or to allow easy handling in low structures such as porticoes and factories. The perfect geometry of the double linkage system allows the horizontal standard lifting configuration to start from 0 degrees: moreover, when the Fassi ProLink system is activated, the outer ram lifting power does not decrease. The standard nominal capacities can be dynamically lifted and handled even in the ProLink working area. The ProLink system is normally used with the booms in a horizontal position but, thanks to its automatic devices, it can also be activated in a vertical position. But take note: activation of ProLink in a vertical position may create some problems.

This is why Fassi has foreseen some electronic and automatic control functions to prevent the crane from ending up with the boom in negative when reaching the maximum vertical value, and to keep it within operating safety limits. This safety system, exclusively applied to Fassi cranes, is electronically handled from the “on-board computer” which automatically reduces the verticality of the first boom when the ProLink system is active, warning the crane operator that the crane is reaching its maximum authorized angle.

During this phase, if lifting continues, the electronic system reduces the ram speed to ensure that, at end of stroke, the load inertia does not determine a state of instability on the extension booms.

In many situations, such as storage in low warehouses (1) or handling in narrow places like porticoes (2), the Fassi ProLink system ensures an increase in crane working options, facilitating the positioning of loads.

Fassi cranes are equipped with an automatic safety system to prevent the boom from being in a negative position when reaching the maximum vertical value.

LIMITS AMONG THE COMPETITION

Fassi doesn’t limit itself to a warning in the crane use and maintenance manual about the possible risks of use, as the most of the competition normally do, making the operator fully responsible for high-risk situations.