USING POWER TO THE BEST ADVANTAGE

The working capacity of a modern hydraulic crane is the direct expression of choices and advanced technological solutions which allow the power to be used and managed exactly when and where it is needed, according to the type of operation and the working situation. With this in mind, the Fassi engineering team has developed innovative devices which revolutionize the very idea of “power”, which can now be controlled with greater precision and is better able to co-ordinate the various lifting, load handling and turning operations. 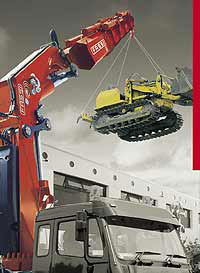 Fassi technological research proves itself once again a reference point in the hydraulic crane sector, with innovations capable of handling power like nobody else can. A supremacy that immediately becomes a concrete expression of work and optimization of the different lifting phases with the innovative Fassi double linkage system, with new materials and kinematics.

A new technology of double linkage on articulations, which assures perfectly constant lifting at all times, as the lever boom always maintains the same distance between the centre of the articulation pin and the ram pin throughout the movement.

Another significant example of work-focused design is the original ProLink System, based on the principle of a longer outer ram combined with a particular double linkage system, which allows the working angle to be increased above the horizontal line by up to 20 degrees. A device applied both on cranes and hydraulic jibs. Both systems ensure improved performance, as shown by load curves which would be impossible to suggest on machines not equipped with these Fassi exclusive new features.

Double linkage and ProLink are of strategic importance for optimum handling of crane operating potential.