SELECTORS AND DIGITAL DISPLAYS: INNOVATION HAS NEVER BEEN SO EASY TO USE

The tangible expression of Fassi’s EASY TO USE technology. 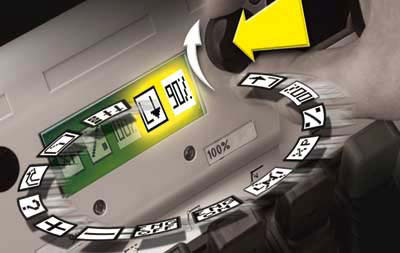 The new RCH radio controls combine all the main elements that characterize this progress in the development of the EASY TO USE concept. A commitment aimed at producing reliable, high-performance devices that are easy to use, rational, and establish a positive and constructive dialogue with the user, from the ergonomics to the readability of the functions. Radio controls are even simpler than before, and at the same time complete and even more versatile, while being more convenient in operational management, covering all the different functions of the crane. The new radio controls feature a control handle that has a large screen where you can display all the information related to the use of the crane, for improved control in all phases of the operation. The standard configurations envisage 6 or 8 linear control levers or multi-functional joystick controls. In the joystick version, which has 8 functions, there are two functions that are executed with the rotary head of the joystick lever itself. The control handle is equipped with a rotary switch, called RX, which with a few simple operations gives the operator access to the various menus identified on the display by icons, with information on the utilization of the crane and access to the programming. The latter is password-protected. All of the on/off push-buttons that can normally be found on traditional radio control handles are therefore eliminated. The antenna and the receiver are one-piece, with greatly reduced dimensions.

The various configurations of the new radio controls are available with linear levers or multi-functional commands. The joystick is particularly practical, and you can manage some of the main functions with just one finger on the rotating head. The Fassi radio controls have innovative graphic displays that show all the functions and operating conditions of the crane.

A compact and easy to use computer.

A microprocessor interfaced with the central processor unit and the CANbus digital data transmission system is located inside the radio controls. The radio controls are fitted as standard with micrometric movements and with a device to reduce progressively the crane’s maneuvering speed (with four different programmable levels). It also has specific functions such as starting, acceleration and stopping the engine of the support vehicle. The radio controls are protected against electromagnetic fields and radio interference. In fact, to avoid possible frequency clashes, they function within protected bands in accordance with the regulations in force in various countries. Every radio control operates with its own unique identification code, and in this way the crane can only be activated with its own specific radio control. The receiver located on the crane has a double processor that constantly checks and verifies the incoming signal. There is an emergency button that stops all the movements of the crane, installed within easy reach on the radio control. Characterized by their ergonomic and highly functional design (registered models), the radio controls are shock-resistant and weather-proof. Due to their superior quality-related technical features, Fassi radio controls are homologated in accordance with the strictest international safety standards and can be also used on working aerial platforms for lifting people.

Fassi’s new RCH radio controls stand out from the crowd due to the housing, the lay-out of the controls, and the devices for easy management of the functions, offering a wide range to meet the specific needs of each user to perfection. The radio controls are protected against electromagnetic fields and radio interference. All the radio controls are in line with the principles of innovation and ease of use that are the characteristic of Fassi’s technology.