The performance and operational versatility of Fassi cranes have been further developed with the new Fassi XF system, bringing standards to a higher level. This technological solution, which is the result of the ongoing activities of Fassi’s research and development division, added to a higher actuation speed of the extension booms, guarantees smooth movements and extremely precise positioning. This innovative device is now part of Fassi’s technological commitment aimed at improving the dialogue between the crane and the user in order to provide not only optimal performance and reliability, but also making operating the machine easy, practical and convenient. The FX system functions by means of new extension rams that have a perfect ram thrust area ratio between the cylinder side and the rod side, thus ensuring a better performance of the oil recycling valve. This means a significant increase in the overall speed of the machine. The oil recycling valve, using the oil that comes from the pump and also that which flows out of the rod side of the ram and goes back to the tank, considerably increases the speed of the extension booms. In addition to this, special lockout valves, located on the rams of the inner and outer articulations, significantly improve precision in utilization, while reducing the oil temperature. This ensures the maximum fluidity and precision of the crane’s movements whenever there is the need to perform several maneuvers at the same time.

The graphic shows the functional and operational improvements that have been made thanks to the use of the innovative XF system with the XF oil recycling valve. Compared to conventional systems, the operating cycle times are considerably shorter, and a smoother workflow is ensured.

Fassi XP, more power just when it is needed
The Fassi Extra Power system is a genuine reserve of power that Fassi cranes make available to users to help them meet the most difficult and problematic operating circumstances caused by the size of the load or particularly demanding dynamic conditions. The system can call on a reserve of power precisely when it is needed, reducing the speed of the crane movements, while at the same time increasing the lifting capacity. The XP system is a strategic ally when you need to lift very heavy loads, or use a lot of lifting torque, or perform maneuvers with the maximum precision. The XP system is great for getting you out of sticky situations, without ever compromising either the performance or the operational safety of the crane. The system can be conveniently started up and disabled with the radio control, making the crane easy to handle in all conditions. 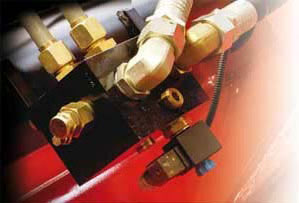 Oil recycling valve
The heart of the innovative hydraulic system on Fassi cranes is the oil recycling valve, which as part of the high-level features and performance of the distributors optimizes the oil flows between pump and rams by significantly increasing the speed of the extension