THE FASSI RESEARCH AND DEVELOPMENT TEAM 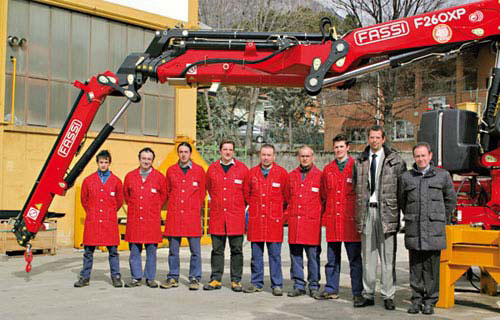 Fassi’s Research and Development team are essentially involved in the production of prototypes, that is to say equipping the new cranes from the structural and design point of view on the basis of data provided by the technical office. It subsequently organizes, coordinates and controls the fatigue tests and the inspections, that is to say tests that permit cranes to go into production “without compromise”, from every point of view. The team always works in direct contact with all of the other Fassi departments, and valuable feedback is received regarding expectations and suggestions directly from the market. In fact, every new project with which the team is faced starts from meeting the requirements of the user. The principal commitment to innovation means finding the best courses of development for the cranes, evaluating the synergy between the information from the market and that from the results of Fassi’s research in the sector. The department is called in to check the feasibility, putting the solutions into practice, and finding just the right balance for these two factors. It also evaluates all the innovations that have resulted from recent developments, particularly in the electronics field. When we think about the extraordinary developments in data transmission systems: today this information represents an essential starting point for putting the project of a new crane into practice. The task is one of organizing the available resources in such a way that they are adopted and made available simply and precisely, in a more efficient manner on truck-mounted cranes.