THE WORKING SPEED OF FASSI CRANES – A FUNDAMENTAL ASPECT WHEN SELECTING A CRANE, AS IT ALLOWS REDUCTIONS IN WORKING TIMES AND USE OF THE MACHINE

Among the least known aspects of hydraulic crane performance, working speed is a feature that needs to be discussed in greater depth. Speed and time saving mean a greater opportunity for movement and lifting services during the working day. However, speed must never detract from the other performance levels of the crane and from overall safety. It is therefore interesting to test a crane fitted with three devices like Fassi’s XF (Extra Fast), Flow Sharing and ADC (Automatic Dynamic Control), technologies that are the most advanced expression of optimization, both of time and working dynamics, in complete safety. 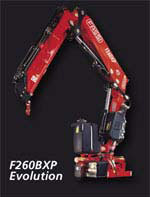 The crane being tested is a F260BXP Evolution. This was not a random choice. This crane belongs to the Evolution series, which is equipped with all the newest Fassi technology. As in many other countries, here in Spain there is an increased request for extremely long cranes, fitted with a number of extensions, that are extremely versatile and can be used in a wide range of lifting situations. The Spanish users also like cranes with large oil tanks and with heat exchangers, so that they can work in maximum safety and peace of mind even in areas of the country where temperatures can become very high.

We organized the test on the premises of a Fassi customer based in Barcelona (Spain), who trades in building materials. The customer in question allowed us to carry out tests on the time required to lift and move bins of loose building materials. However, first of all we started by calculating the time required for what can be termed “basic maneuvers”. We were extremely interested in this test, because Fassi’s technical and operating specifications indicated particularly fast times, and we wanted to test these out in practice.

The speed of basic crane movements

First of all we calculated the time required to move the crane from the rest position, folded behind the cab, to the working position with booms vertical. The whole movement was carried out in 32 seconds. We then went on to calculate the time required to extend the booms to maximum. On the crane we were testing there were 6 extending booms: this operation actually took 43 seconds. We then tried retracting the booms, and timed this operation at 39 seconds net. We then went on to look at the time required to turn the crane by 360°, which took 45 seconds, within the limits set by Fassi to guarantee safety. Starting with the crane in a completely horizontal position, we then checked the lifting speed at maximum extension: this was found to take 20 seconds; movement in the opposite direction stopped the clock at just 12 seconds. Finally, we timed how long it took to move from the standard working position to the rest position: the whole operation took 26 seconds.

Results like these are certainly due to a great extent to use of the Fassi XF system. The XF system works using a new generation of extending rams, which have a perfect piston thrust ratio on the cylinder and shaft side, so as to guarantee the best possible oil regeneration valve performance. This ensures considerable increases in the overall speed of the machine. Using the XF system the basic cycle times are reduced by a considerable amount, and greater working fluidity is guaranteed.

To carry out our first test we used a bin of loose material weighing 800 Kg. We immediately noted the importance of the Flow Sharing system. In effect, movement was carried out by simultaneous activation of three functions: lifting of the main boom, lifting of the secondary boom and extension of the extending booms. The system allowed maximum performance in terms of speed, and effective multiple function management. Flow Sharing enables a greater flow of oil to be sent to the digital hydraulic distributor, giving genuine multiple function performance as the movements of the lifting rams vary. The ADC system manages the speed of crane movements automatically as the load varies, allowing less experienced or more audacious users to operate in full safety, while saving the crane from the stress imposed by excessively sudden or risky maneuvers.

We then moved on to examine the XP system, loading the crane with an extremely severe load, at the limit of its lifting capacity: a load weighing 4.8 t. We wanted to see how the Fassi XP system works. The Fassi XP system is a power reserve that Fassi cranes provide for users to help in more difficult situations. We lifted and transported the load in conditions that would have put a normal crane into severe difficulty. We, on the contrary, noted that our Fassi crane with XP provides a surplus of power exactly when it is needed, allowing us to get out of even the most critical situations. The XP system enabled us to avoid having to stop work, which would have wasted time. 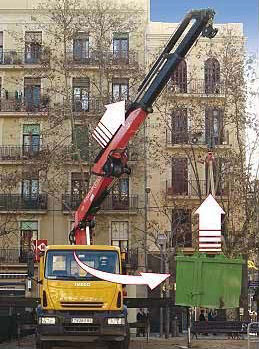 The ability to carry out various movements simultaneously is essential in order to save precious time. We were interested to see that Fassi has perfected a Flow Sharing system (see below) that guarantees genuine multiple function performance. The new generation of Fassi winches, such as the V20 tested by use, are extremely convincing and very fast.

Speed with the winch

Our test ended by a trial using the V20 winch fitted on the crane. Here again we looked at times. We applied a load weighing 800 Kg to the winch hook. Lifting to 20 meters took 23 seconds. In this final test we once again confirm that the Fassi crane gives excellent performance, even when using this important accessory.

The Fassi customer who took part in the test

The test was carried out in Barcelona at GRUAS Y TRASPORTE EL RAYO AMARILLO, who hires out cranes for the building industry. The company currently has a fleet of 60 vehicles, including 35 2, 3 and 4 axle trucks of between 20 and 80 tons, all with Fassi cranes. The new generation of Fassi winches, such as the V20 tested by use, are extremely convincing and very fast.